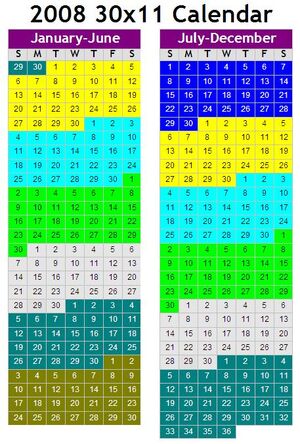 The 30x11 (Thirty-eleven) Calendar is a calendar reform of the Gregorian calendar.

The first 11 months of the year (January through November) have 30 days each, while December has 35 days, except during leap years, when it has a 36th day, which becomes the last day of the calendar year. It features three equal business quarters of 90 days each, with the final quarter lasting 95 or 96 days.

The 30x11 calendar changes only the lengths of the months, but leaves other aspects of the Gregorian alone.

The 30x11 Calendar preserves the traditional 7-day week and the 12-month calendar year, and does not seek to start each year on the same day of the week each year, as some calendar reform proposals do. Thus it is not, and does not attempt to be, a "perpetual calendar". It may be implemented in any year, since it may begin on any weekday and also each year starts on the same day as the Gregorian calendar.

Most monthly calendars repeat within the year. January’s calendar is the same as August’s, February’s is identical to September’s. March and October, and April and November likewise match.

Each month in the 30x11 Calendar begins exactly two weekdays after the previous month. If, as in 2007, January started on a Monday, February would have started on a Wednesday, March on a Friday. This makes determining days of the week simple. February 8, 15, 22, and 29th occur on Wednesdays in this example.

The calendar does not utilize "off-calendar" or "null" days that stand outside the calendar year in order to reach 365 or 366 days. Therefore, the 30x11 Calendar's December 32 through December 35/December 36 are not "extra" days added to the calendar, nor are they part of a "leap week" that recurs every few years (as do proposals like the Symmetry454 Calendar and New Earth Calendar) but as the 362nd through 365th/366th days of the regular solar calendar. February 29 (now coming every year) and another extra day February 30 also do not extend the length of the year. That's all because January 31, March 31, May 31, July 31, August 31 and October 31 are removed and are replaced with six other days.

A perceived flaw of the 30x11 calendar is that it does fail to address the problem of achieving four equal quarters, as some other calendar reform proposals have successfully achieved by using leap weeks and off-calendar days.

Six '31st' days have been moved, taken from January, March, May, July, August and October (though not December) and it has been suggested that people born on the 31st day of the month celebrate birthdays falling on those days on the last day of the month or first day of the following month. Halloween is now on October 30 according to this rule. In the 30x11 Calendar, February 29 would appear on the calendar every year, rather than every four years during the Gregorian leap year.