Julian day is used in the Julian date (JD) system of time measurement for scientific use by the astronomy community, presenting the interval of time in days and fractions of a day since January 1, 4713 BC Greenwich noon. Julian date is recommended for astronomical use by the International Astronomical Union.

The Julian Day Number (JDN) is the Julian day with the fractional part ignored. It is sometimes used in calendrical calculation, in which case, JDN 0 is used for the date equivalent to Monday January 1, 4713 BC in the Julian calendar.

The term Julian date is widely used to refer to the day-of-year (ordinal date) although incorrectly.

Historical Julian dates were recorded relative to GMT or Ephemeris Time, but the International Astronomical Union now recommends that Julian Dates be specified in Terrestrial Time, and that when necessary to specify Julian Dates using a different time scale, that the time scale used be indicated when required, such as JD(UT1). The fraction of the day is found by converting the number of hours, minutes, and seconds after noon into the equivalent decimal fraction.

The term Julian date is also used to refer to:

The use of Julian date to refer to the day-of-year (ordinal date) is usually considered to be incorrect although it is widely used that way in the earth sciences, computer programming, military and the food industry.[1]

The Julian date (JD) is the interval of time in days and fractions of a day since January 1, 4713 BC Greenwich noon, Julian proleptic calendar.[2] In precise work, the timescale, e.g., Terrestrial Time (TT) or Universal Time (UT), should be specified.[3]

If the Julian date of noon is applied to the entire midnight-to-midnight civil day centered on that noon,[5] rounding Julian dates (fractional days) for the twelve hours before noon up while rounding those after noon down, then the remainder upon division by 7 represents the day of the week (see the table below). Now at 15:39, Tuesday May 24, 2022 (UTC) the nearest noon JDN is 2459724 yielding a remainder of 1.

The Julian day number can be considered a very simple calendar, where its calendar date is just an integer. This is useful for reference, computations, and conversions. It allows the time between any two dates in history to be computed by simple subtraction.

The Julian day system was introduced by astronomers to provide a single system of dates that could be used when working with different calendars and to unify different historical chronologies. Julian day and Julian date are not directly related to the Julian calendar, although it is possible to convert any date from one calendar to the other.

Because the starting point or reference epoch is so long ago, numbers in the Julian day can be quite large and cumbersome. A more recent starting point is sometimes used, for instance by dropping the leading digits, in order to fit into limited computer memory with an adequate amount of precision. In the following table, times are given in 24 hour notation.

The Heliocentric Julian Day (HJD) is the same as the Julian day, but adjusted to the frame of reference of the Sun, and thus can differ from the Julian day by as much as 8.3 minutes, that being the time it takes the Sun's light to reach Earth. As two separate astronomical measurements can exist that were taken when the Earth, astronomical objects, and Sun are in a straight line but the Earth was actually on opposite sides of the Sun for the two measurements, that is at one roughly 500 light seconds nearer to the astronomical than the Sun for the first measure, then 500 light seconds further from the astronomical object than the Sun for the second measure, then the subsequent light time error between two Julian Day measures can amount to nearly as much as 1000 seconds different relative to the same Heliocentric Julian Day interval which can make a significant difference when measuring temporal phenomena for short period astronomical objects over long time intervals. The Julian day is sometimes referred to as the Geocentric Julian Day (GJD) in order to distinguish it from HJD.

The Julian day number is based on the Julian Period proposed by Joseph Scaliger in 1583, at the time of the Gregorian calendar reform, but it is the multiple of three calendar cycles used with the Julian calendar:

Its epoch falls at the last time when all three cycles (if they are continued backward far enough) were in their first year together — Scaliger chose this because it preceded all historical dates.

Although many references say that the Julian in "Julian day" refers to Scaliger's father, Julius Scaliger, in the introduction to Book V of his Opus de Emendatione Temporum ("Work on the Emendation of Time") he states, "Iulianum vocavimus: quia ad annum Iulianum dumtaxat accomodata est", which translates more or less as "We have called it Julian merely because it is accommodated to the Julian year." This Julian refers to Julius Caesar, who introduced the Julian calendar in 46 BC.

In his book Outlines of Astronomy, first published in 1849, the astronomer John Herschel wrote:

The first year of the current Julian period, or that of which the number in each of the three subordinate cycles is 1, was the year 4713 B.C., and the noon of the 1st of January of that year, for the meridian of Alexandria, is the chronological epoch, to which all historical eras are most readily and intelligibly referred, by computing the number of integer days intervening between that epoch and the noon (for Alexandria) of the day, which is reckoned to be the first of the particular era in question. The meridian of Alexandria is chosen as that to which Ptolemy refers the commencement of the era of Nabonassar, the basis of all his calculations.

Astronomers adopted Herschel's Julian Days in the late nineteenth century, but used the meridian of Greenwich instead of Alexandria, after the former was adopted as the Prime Meridian after the International Meridian Conference in Washington in 1884. This has now become the standard system of Julian days. Julian days are typically used by astronomers to date astronomical observations, thus eliminating the complications resulting from using standard calendar periods like eras, years, or months. They were first introduced into variable star work by Edward Charles Pickering, of the Harvard College Observatory, in 1890.[13]

Julian days begin at noon because when Herschel recommended them, the astronomical day began at noon (it did so until 1925). The astronomical day had begun at noon ever since Ptolemy chose to begin the days in his astronomical periods at noon. He chose noon because the transit of the Sun across the observer's meridian occurs at the same apparent time every day of the year, unlike sunrise or sunset, which vary by several hours. Midnight was not even considered because it could not be accurately determined using water clocks. Nevertheless, he double-dated most nighttime observations with both Egyptian days beginning at sunrise and Babylonian days beginning at sunset. This would seem to imply that his choice of noon was not, as is sometimes stated, made in order to allow all observations from a given night to be recorded with the same date.

The Julian day number can be calculated using the following formulas (integer division is used exclusively, that is, the remainder of all divisions are dropped):

You must compute first: 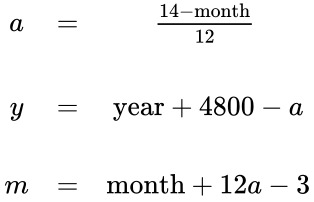 NOTE: When doing the divisions, the fractional parts of the quotients must be dropped. All years in the BC era must be converted to a negative value then incremented toward zero to be passed as an astronomical year, so that 1 BC will be passed as y=0.

For the full Julian date, not counting leap seconds (divisions are real numbers):

The day of the week can be determined from the Julian day number by calculating it modulo 7, where 0 means Monday.

The operations div and mod used here are intended to have the same binary operator priority as the multipication and division, and defined as:

The time of the day is then computed from the fractional day T = frac(JD + 0.5). The additive 0.5 constant can also be adjusted to take the local timezone into account, when computing an astronomical Gregorian date localized in another timezone than UTC. To convert the fractional day into actual hours, minutes, seconds, the astronomical Gregorian calendar uses a constant length of 24 hours per day (i.e. 86400 seconds exactly), ignoring leap seconds inserted or deleted at end of some specific days in the UTC Gregorian calendar. If you want to convert it to actual UTC time, you will need to compensate the UTC leap seconds by adding them to J before restarting the computation (however this adjustment requires a lookup table, because leap seconds are not predictable with a simple formula); you'll also need to finally determine which of the two possible UTC date and time is used at times where leap seconds are added (no final compensation will be needed if negative leap seconds are occurring on the rare possible days that could be shorter than 24 hours).

UNIX time is the term used to describe the manner in which UNIX-like operating systems internally maintain time.  The variable type time_t defines UNIX time in terms of seconds elapsed since midnight January 1, 1970 UTC, a point in time referred to as the epoch.  Negative time_t values represent dates prior to the epoch.  Assuming the variable U has been defined to be of type time_t, the following mathematical progression may be used to break down a UNIX time value to its civil time equivalent:

where ss are seconds, mm minutes and hh hours.  Day, month and year can be calculated as in the section Gregorian calendar from Julian day number, applying calculations to: