The Julian day number (JDN) or Julian day is the integer number of days that have elapsed since the initial epoch defined as noon Universal Time (UT) Monday, January 1, 4713 BC in the proleptic Julian calendar [1]. That noon-to-noon day is counted as Julian day 0. Thus the multiples of 7 are Mondays. Negative values can also be used, although those predate all recorded history.

The Julian date (JD) is a continuous count of days and fractions elapsed since the same initial epoch. Currently the JD is 2459726.9229167. The integral part (its floor gives the Julian day number. The fractional part gives the time of day since noon UT as a decimal fraction of one day or fractional day, with 0.5 representing midnight UT. Typically, a 64-bit floating point (double precision) variable can represent an epoch expressed as a Julian date to about 1 millisecond precision.

The Julian day number can be considered a very simple calendar, where its calendar date is just an integer. This is useful for reference, computations, and conversions. It allows the time between any two dates in history to be computed by simple subtraction.

The Julian day system was introduced by astronomers to provide a single system of dates that could be used when working with different calendars and to unify different historical chronologies. Apart from the choice of the zero point and name, this Julian day and Julian date are not directly related to the Julian Calendar, although it is possible to convert any date from one calendar to the other.

Historical Julian Dates were recorded relative to GMT or Ephemeris Time, but the International Astronomical Union now recommends that Julian Dates be specified in Terrestrial Time, and that when necessary to specify Julian Dates using a different time scale, that the time scale used be indicated when required, such as JD(UT1). The fraction of the day is found by converting the number of hours, minutes, and seconds after noon into the equivalent decimal fraction.

The term Julian date is also used to refer to:

The use of Julian date to refer to the day-of-year (ordinal date) is usually considered to be incorrect.

Because the starting point is so long ago, numbers in the Julian day can be quite large and cumbersome. A more recent starting point is sometimes used, for instance by dropping the leading digits, in order to fit into limited computer memory with an adequate amount of precision.

The day is found by rounding downward, currently giving 59726. This number changes at midnight UT or TT. It is 2,400,001 less than the Julian day number of the afternoon half of the same day (which is the same as the JD at noon). It is (of course) a multiple of 7 on Wednesdays.

This was chosen so the number would resemble the MJD but be only four digits long. TJD exceeded four digits on October 10, 1995, and NASA now uses five-digit TJDs [1]. NIST, however, defines TJD cyclically so that it never exceeds four digits:

where Zoff is the offset of the timezone considered, in fractional days. In the second form, it is an integer that labels an entire day, midnight-to-midnight local time. This is the result of rounding the first form of RD downwards (towards negative infinity). Thus:

In the third form, the RD is an integer labelling noon local time, and incapable of labelling any other time of day. This is defined as

where the RD value must be an integer, thus constraining the choice of JD. This form of RD is used in the book for conversion between calendars that separate days on different boundaries. The book does not explicitly distinguish between these three forms, using the abbreviation "RD" for all of them.

The Julian day number is based on the Julian Period proposed by Joseph Scaliger in 1583, at the time of the Gregorian calendar reform, but it is the multiple of three calendar cycles used with the Julian calendar:

Its Epoch falls at the last time when all three cycles were in their first year together — Scaliger chose this because it pre-dated all historical dates.

Note: although many references say that the "Julian" in "Julian day" refers to Scaliger's father, Julius Scaliger, in the introduction to Book V of his Opus de Emendatione Temporum (Work on the Emendation of Time) he states: "Iulianum vocauimus: quia ad annum Iulianum dumtaxat accomodata est" which translates more or less as "We have called it Julian merely because it is accommodated to the Julian year". This "Julian" refers to Julius Caesar, who introduced the Julian calendar in 46 BC.

In his book Outlines of Astronomy, first published in 1849, the astronomer John Herschel wrote:

The first year of the current Julian period, or that of which the number in each of the three subordinate cycles is 1, was the year 4713 B.C., and the noon of the 1st of January of that year, for the meridian of Alexandria, is the chronological epoch, to which all historical eras are most readily and intelligibly referred, by computing the number of integer days intervening between that epoch and the noon (for Alexandria) of the day, which is reckoned to be the first of the particular era in question. The meridian of Alexandria is chosen as that to which Ptolemy refers the commencement of the era of Nabonassar, the basis of all his calculations.

Astronomers adopted Herschel's Julian Days in the late nineteenth century, but used the meridian of Greenwich instead of Alexandria, after the former was made the Prime Meridian by international conference in 1884. This has now become the standard system of Julian days. Julian days are typically used by astronomers to date astronomical observations, thus eliminating the complications resulting from using standard calendar periods like eras, years, or months.

Julian days begin at noon because when Herschel recommended them, the astronomical day began at noon (it did so until 1925). The astronomical day had begun at noon ever since Ptolemy chose to begin the days in his astronomical periods at noon. He chose noon because the transit of the Sun across the observer's meridian occurs at the same apparent time every day of the year, unlike sunrise or sunset, which vary by several hours. Midnight was not even considered because it could not be accurately determined using water clocks. Nevertheless, he double-dated most nighttime observations with both Egyptian days beginning at sunrise and Babylonian days beginning at sunset. This would seem to imply that his choice of noon was not, as is sometimes stated, made in order to allow all observations from a given night to be recorded with the same date.

The Julian day number can be calculated using the following formulas: 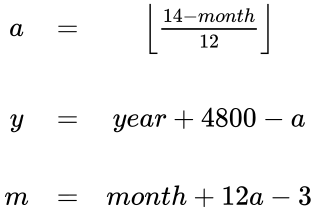 For a date in the Gregorian calendar (at noon):

For a date in the Julian calendar (at noon):

The constants used at the end of the Gregorian and Julian formulas are required to return exactly the same values of JDN between March 1, 200 and February 28, 300. The constants are the JDNs of February 29, −4800 in each calendar.

For the full Julian Date, not counting leap seconds (divisions are real numbers):

The day of the week can be determined from the Julian day number by calculating it modulo 7, where 0 means Monday.

We can then develop these formulas into a single inlined formula per component, computed as above. All this computing requires only integers and so is not sensitive to rounding errors caused by floating point approximations (most decimal fractions have an inexact representation within the binary format used by floating point arithmetic used by most computer software, so using them would produce false results on some dates because of roundoff errors).

The formulas below (which use Euclidian division—integer division and modulo—without any negative number) are valid for the whole range of dates since −4800. The resulting date components are valid only in the Gregorian proleptic calendar using astronomical year numbering, which is based on the Gregorian calendar, but extended to cover dates before 1582, including the pre-Christian era. This calendar includes a zero year, which is 1 BC in the proleptic Gregorian calendar, as it is one year before 1 AD.